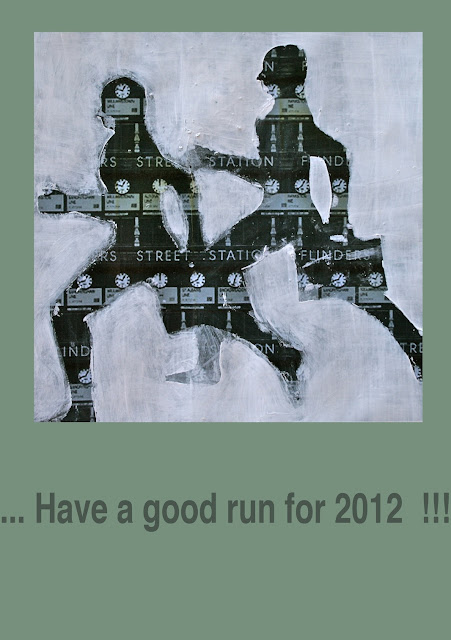 Wishing everybody a 'happy new year' ! Hoping that 2012 will bring us more peace and more awareness .
HAVE  A WONDERFUL CREATIVE 2012 !!!
Posted by Michele Meister at 8:38 AM 8 comments:

A little bit of Greek Mythology painted on an old wine menu ! The meaning of the Greek writing  is 'poor Europe'.
I know I just had a break, but around Christmas time ( the same everywhere ) there is just not enough time for the 'to do list' .... So I am not having a break, but will be posting probably not as regularly here as I wished for :)

Posted by Michele Meister at 8:06 AM 5 comments:

Just to let everybody know, that I didn't stop working or stopped blogging.... I am having a little break, also from the computer world, and will be back very soon !! I hope you are all well ..... :)

Posted by Michele Meister at 9:07 AM 7 comments:

This painting has been inspired by the Greek movie Attenberg that I saw the other day. A very intense movie. The two women where actually not sisters but friends .... but very close.
The mixed media in this one are coffee ( as usual...) mascara, shoe polish, ink and a little bit of acrylic !

'Remembering the light 3' is a work done on Photoshop. This is how sometimes new ideas start, with a photo of an original art work and times on my hands with Photoshop .... Something like that might become my next work . I like the idea of 'sisters' .....

The third painting after my 3 weeks break, and it is the first one, that I am happy with !
Like with everything, painting needs exercise and work and work and work :) I heart from one artist (Horst Janssen) that he would draw first thing in the morning 50 (!!!!) hands, before he would even start to do his own work for the day .... Just to loosen up. I think I need to get back to my small sketchbook to loosen up again and be more experimental ! How do you loosen up ?
Posted by Michele Meister at 10:46 AM 5 comments:

Posted by Michele Meister at 9:49 AM 4 comments:

Back at work since yesterday ..... After just 3 weeks of a break, I have the feeling I need to relearn to paint ... and the big questions comes : "WHAT" to paint .... and also a little bit "WHY" to paint !
I just need few days to get back into the rhythm I suppose.
I did enjoy the smell of the hot wax and the oil though :)

I am having a little bit of a brake to relax and sit down :)
It is that time of the year again, one more school holidays ! As always I want to keep working , but it somehow never works that way .... So I am just accepting it and I will be back  painting in 10 days !

I have been working on it for a while, and  here it is :)

I thought that this series of Red Ridind Hood  is complete and I also wanted to have them all together... also the ones form  my sketchbook !

always in my thoughts paper and canvas by Michele Meister

I am having a solo show at Red Bubble, where you are able to see my work in larger so you can see more details! I hope to 'see' you there !!
Posted by Michele Meister at 12:46 PM 8 comments:

portrait of a woman

Today I was working on canvas again ! Which I normally  like... But after all these months working on paper, I was  missing the 'liberty of the paper', because  it gives you the feeling , that it is not 'that important'! The difference is also that the canvas doesn't give you as much  resistance like  the wood behind the paper does !
.... But I like the linen colour and also that you can see the work without having a glass in between !

At the moment I am quiet happy to just try out new techniques and new themes  !

I don't think I have to write a lot about this one today ! The last couple of weeks have just been exactly like that. One of those times, when you think you might never have an idea again .... and WHY painting anyway...;-)

I hope... today was the first step to be able to work again !

I think 'slowly slowly' I am getting away from Red Riding Hood :)
...Even I might have said that already a month ago !

Today's work is a portrait, which really isn't about the face, but the colours and the texture !
My favourite spot for example in this work,  is the little red and orange dot in the green background on the left, and the textured red jumper... The portrait is maybe just the 'starting point' for the painting, but really, it is about these little dots :))...
Posted by Michele Meister at 1:48 PM 6 comments:

I don't know if I will  ever get away from the Red Riding Hood Story :) The wolf is just always coming back, even this time he wasn't really planned ....
Posted by Michele Meister at 6:47 AM 5 comments:

This is a typical 'Michele Portrait' .... When I don't have a model or a photo, my portraits look all similar ! First at al,l they all look so sad and always a little bit like they are coming from another world !!!
Even when I have a look at really old portraits that I have done when I studied, they have the same expression ! I wonder why that is....

I didn't paint for 2 weeks after my little '30 day art challenge, not because I needed a brake, but because there was the school holidays and even I wanted to paint , there is never enough time !
Even after  only this short brake, I feel somehow it is starting from the beginning again ... The question , WHAT to paint and even HOW to paint :)
The first day I painted the 'Red Riding Hood' which really was just an enlargement of one of the sketches. The sketch is much stronger as always .... I don't even know why I bother to rework sketches in a larger size , but as a starting point after resting for 2 weeks , it was probably sensitive to do ! The painting yesterday 'Unschuld' was  a new idea, but still involves the wolf and Red Riding Hood .
With the title I realised, that some words you just can not translate. ' Unschuld' ( German )  meaning : innocence, but also virginity and it has the word 'Schuld' which means 'fault, mistake' and 'schuldig' is 'guilty' which  with other words means , once you loose your innocence you are guilty ! So I left the German title ... There are so many words that you can't translate without loosing some of it's meaning !
At the end one question, that you maybe can help me with ...Why do you call 'Red Riding Hood' like that in english ? In all other languages I am aware of, she is called after her red hood ... Why is she riding ? Does anybody know ?
Posted by Michele Meister at 9:57 AM 7 comments:

The last 3 days of the 30 day art challenge

The last day of my challenge to fill a sketchbook in 30 days ! Hurrrraaayyyyyyy ! I did it ... The sketchbook is full and I should have enough ideas for bigger paintings for the next few months :)
I have enjoyed that project very much ... Not only to have FINALLY a full sketchbook, but also the challenge to come up with new ideas, even when you think  "Today I can't think of anything" ! I also had such an amazing response from my 'Red Bubble' friends, that I have to recommend to other artists who are not on Red Bubble to try it out ! I am somehow already missing my sketchbook ...I think tomorrow I will have to get a new one.... ;-)

It is not that long to go anymore until I finish this sketchbook. I am looking forward to the last page and at the same time I know I will miss it :)
But I decided to always have a sketchbook and to work daily on it . Probably even few different ones ! One for drawings,
One for just colour combinations and scraps ,
One  for ideas and little paintings like this one !
So I need three new sketchbooks ....

Michele Meister
Melbourne, Australia
I was born in 1966 and grew up in Lausanne , Switzerland. and Uelzen, Germany . I studied Art in Hamburg at the FIU ( Free International University ) which has been founded after the FIU idea of Joseph Beuys. After I finished my studies, I left Germany to go to Santorini, Greece. That trip was meant to be for a year and I stayed for 14 ! Santorini is the place that I call now home ( even I feel very German , since I left Germany ). In Greece I started with different works ( like sign drawings, architecture drawings, guiding ) until I finally opened my own gallery that was also my studio in 1998. I moved to Melbourne in 2004 and experience a new life again !

Welcome to my blog ... and feel free to comment !
Visit me on my web page :
www.michelemeister.jimdo.com
or visit me on:
http://michelara.redbubble.com/